Will you make a version able to run with r30.0?

Hey I quite like this mod, mainly cause mega boobs, but I have been curious as to the use of the Shadow Pendent and also one bug I face constantly is my game soft locks when mega boobs is on and they bend over like in the milkers. Says there is a "mesh loading error"

Can anyone tell me how to install this on android

Are you going to continue development on this mod? I feel it has potential

Suggestions? I have a couple, since you're not restricted by patreon's ToS, maybe you could add an area where you can visit the children you've had allowing you customize them and perhaps adventure with them(They'll have been magically aged up, maybe it could be something Pixie does), also since this is only a mod and not an official release by Indivi, I would love to see customization options that allow you to replicate existing characters (I.E. Rinny, Sammy, and Lin Lin) and if you ever get the battle system figured out see if you can't Maybe add a party system that also allows you to dress your companions up

I do have an idea but it's just a lot of spells that i thought might be cool. I really love magic and the idea of magic and as you mentioned looking through the comments for mod ideas here's mine. there are about 10 different spells here to look at. If I knew how to code i would most likely do this myself. but i don't so here you go!

Teleport - can be used out side of and in combat, acts as 1 of 3 things in combat depanding on the situation. An instant ungrapple, a counter which returns 25% of damage prevented or as a set up to deal bonus damage by getting in close +20% damage/lust on next attack or spell (this is supposed to be a "spamy move" that can be done over and over for little cost). Out of combat it can be used to teleport to areas you wouldn't be able to reach otherwise. allowing for more traversability and potentially access to new areas. (if you got any you wanna add through this)

Electrically charged - skip one turn as a charge to deal a massive amount of damage on the next, this may leave the opponent with some type of paralysis, leaving them unable to move

Quick step - this is a simple speed boost that lets you always go first and doubles what you do on that turn by repeating it along with it's cost if it's a spell, this can lead to some chaos along with some good an d bad situations occurring. It lasts for 3 turns.

Time frame - temporarily freeze time or one turn, can be used out side of combat in tight situations. (like when freeing the cat girl who's name escapes me right now). This spell makes you skip the opponents turn.

Paralyzing touch - apply a paralysis status to the opponent, this gives a 70% chance to, well, paralyze the opponent and skip their turn. this deals lust damage as well.

Endless rage - this is a typical damage increase that adds a 50% damage boost to the next 3 attacks/ turns.

Lustful fire - this is a more physical magic attack that depending on how high your lust/how low your health is, it increases in damage and lust damage.

I have no idea what the MP cost of these spells should be as i don't really understand the balance of the game quite yet.

I had been having fun with the mod and i had seen the fun times city, when will it get completed?

Hey hey, i have a cool idea, what if you add custom clothing or items (no i am not going to ask for you to add a minigun in the game but it would be silly)

It is possible (Screenshots (don't mind the time difference, I just thought of adding more screenshots later)) but it's a bit complicated and you'll lose your progress (there may be a way to back it up, but I haven't tried it). If you are still interested, just reply and I'll try to be your guide.

PS:
Before you even think of asking, I won't share the modified APK I made. I wouldn't mind sharing it, but I don't have the necessary permissions from Indivi and LustDollLover and I don't feel like asking.

No worries, not a bother.

Could you tell me? I really wouldn't mind the progress loss.

Of course. Sorry for the late reply.

If you find instructions like "Decompile the apk using apktool" too vague, just tell me and I'll give you the step-by-step instructions. And don't lose the key you used to sign the apk.

One more thing, I found a way to move saves on Android, but it requires your phone to be rooted.

Reply
View more in thread
Nothing210 days ago

This mod is really good in my opinion, i don't have any ideas about what could be added, but instead i'll just leave some feedback about what already is there.
First of all, i think the noclip could get some limitations so it doesn't glitches your save file completely if you're not careful enough, because it's something really unstable.
Second, i hope the Megaboobs get completely added into the game, because there are a lot of clothes that completely bug when you use them with the Megaboobs, even if it's just visual bugs (as far as i saw), it's still bugs.
I think that's it for now, i don't have much to say more than that, still, it's a really cool mod, thanks for making it.

Can you make a way to unlock the bad ends without having to subscribe to indivi's patreon? (the endings where you get captured

Is there a list of things that are ready to do/see? i made it to fun times city but so far [0.4.2a], everything there is blocked off or empty.

I hate to be a bother but I can't seem to get it to activate. I put the zip and the extracted files from it, but I still can't seem to get the mods to work in the game. I know it's probably a very simple fix, but i have no clue what's happening with it (btw I'm using android)

What versions of LD+ is this compatible with?

is it also compatible with the newer versions?

Will you also be adding enemies?

I'm planning on it, I just need to figure out how the game's combat system works.

I have unziped the file, what should I do next??

Are you using the www.zip or the Lust Doll+ Extra v0.4.2.zip? With the www.zip you just need to paste the unzipped version into the same place as the www folder of the original game.

Is there going to be a Android version of it

I am currently working on a way to make the modded version work on non-windows platforms, including Android.

is the mod for only downloads or can it work in browser?

It only works for downloads.

Hey, the downloads all say they were last updated in November despite the page here saying it was updated 15 hours ago.

Also, does this in anyway corrupt the regular game?

The mod won't corrupt the regular game, but trying to use saves from the modded version with the original will probably cause some problems. I was fixing some inaccuracies in the mod's description that's why it says it was recently updated.

I love this mod. Its great in my opinion. Just wondering, will you be adding some easter eggs with that new area you made?

I do have a couple ideas in mind~

I'm on Windows
But I just can't figure out how to download the mod
I've tried both the 19.2 file and the www file, but all that I've gotten to happen is that the mod options are added, but it's just a black void with random colors

That might be caused by using a save from a later version of Lust Doll+. Do you have any screenshots? 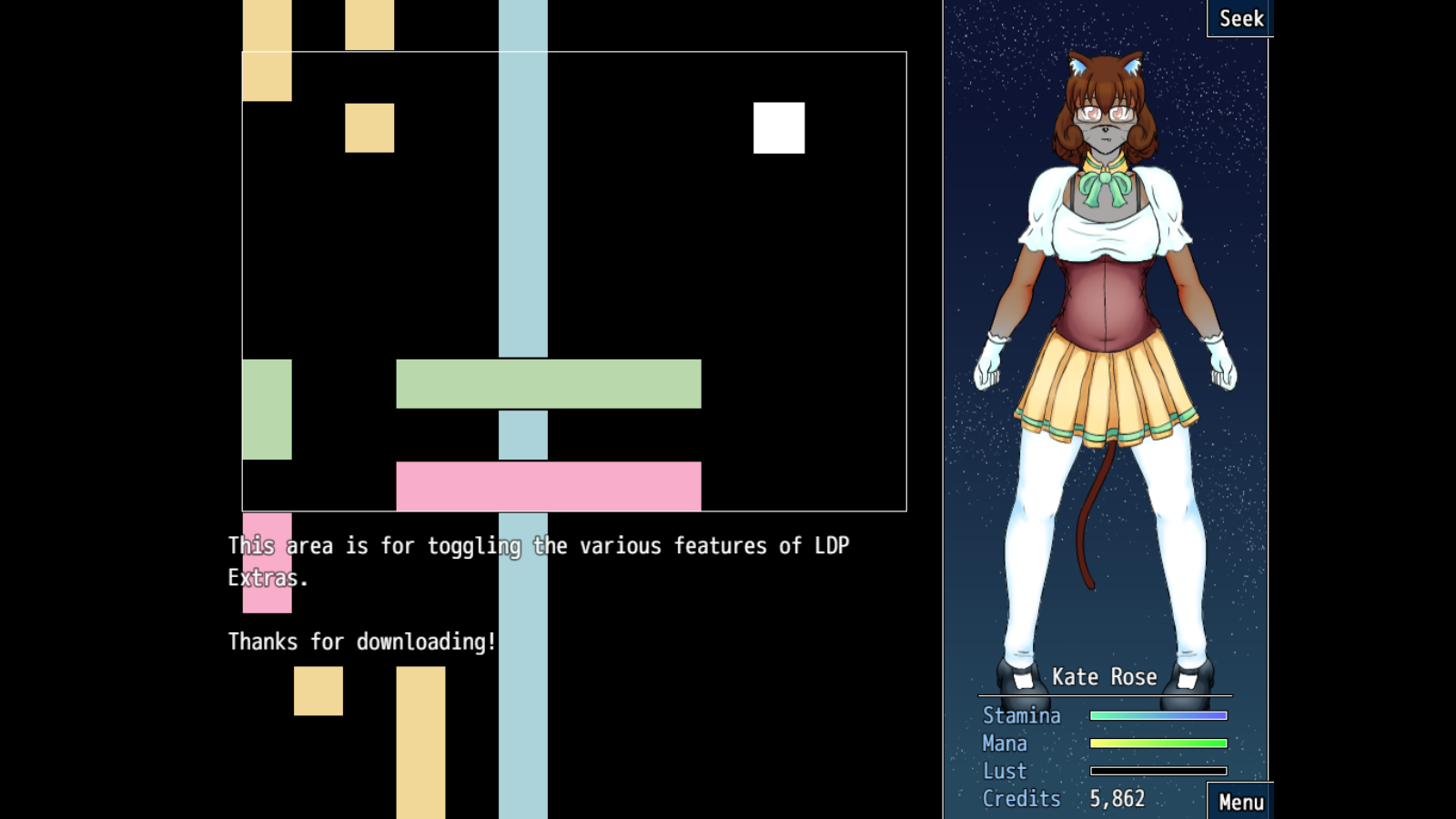 Is it even possible to download an older version of it?

Did it will have MEGACOCK Update? Lol

quick question (which probably has a very obvious answer but im dumb) where do i install this to in the lustdoll+ folder?

If you're downloading the www.zip just extract it into the www folder for lust doll+ but make sure you are using the r19.2 version.

win is the next update

I think I'm going to wait until ldp is complete before making another update. But I am working on another project that should be done in a few weeks or so.

If i replace the www folder, are my safe gonna gone?(sorry if my english bad)

Replacing the www folder shouldn't do anything to your saves, what device are you using?

Does is work on  Android

From what I understand, it should work if you download the original game and replace the www folder with the one for the mod.

I'll try to do some more research~!

how do I know its working

If it's working, you should see 'mod settings' in the inner sanctum.

If it still isn't working I'll look into it tonight when I get home.

I'm not confident enough in my writing abilities to add scenes to the game. If anyone thinks they can write a good scene I would be willing to accept the help, but I also think it would be better to wait until Indivi starts accepting third-party scenes like he did for classic.

That does sound fun! I'll consider adding it.

I plan on adding a lot of scenes from the original game, so when one of them gets added to the base game I will most likely allow for the player to choose which scene they want to see (provided the newer version of the scene isn't essential to the story).